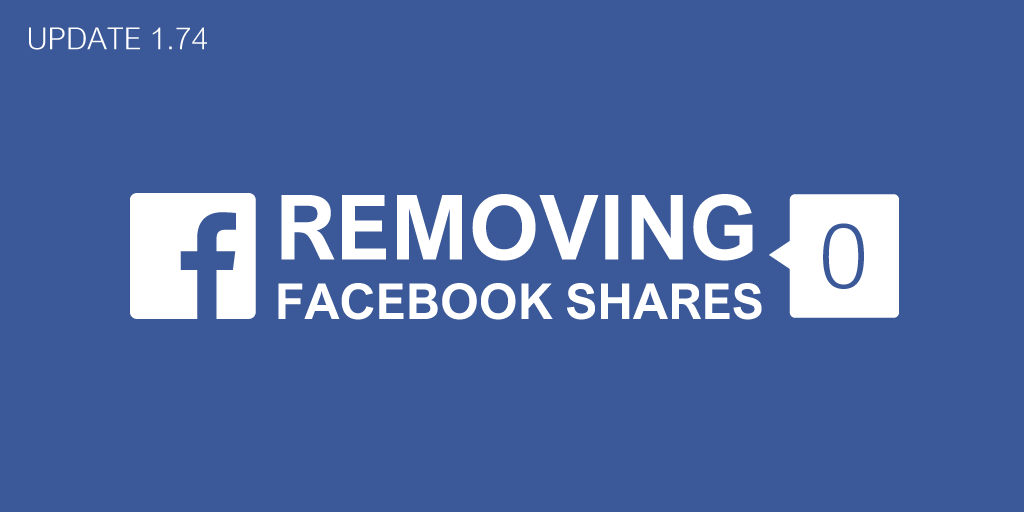 Posted on: September 1st, 2016 by Patrick Hathaway in Updates

The eagle-eyed among you will have noticed that it has been returning zeros for the last couple of weeks, and this is due to Facebook depreciating the API we used to gather this data.

Whilst this appears to follow Twitter’s decision to remove share data in terms of chronology, it is actually an API version that was officially replaced over 2 years ago (with a 2 year depreciation period).

Essentially, Facebook want to move towards an authentication system. So the data is accessible, via a browser, if you are logged in. This doesn’t play nicely with URL Profiler, being a desktop product, and is not set up to allow data extraction at scale – something which URL Profiler excels at.

We looked into other options, such as scraping the data using proxies, which actually is possible, but is both slow and unreliable. It made for a really bad user experience, so we were somewhat relieved when over 75% of the active customers we surveyed told us we shouldn’t keep the Facebook count feature.

So, when you download the updated version, it will no longer be an option you can select. Incidentally, this API change spelled the death knell for SharedCount, another tool which enabled bulk social share lookups, and they are now depreciating their API completely.

Recently, a number of users have had trouble getting data back from the Moz API. Partially, this is to do with internal issues at Moz, where the API was coming under strain and not being able to fulfil requests.

However, it was also not helped by the interface in URL Profiler, which was confusing some users into thinking they had a ‘paid’ API with Moz, when in fact they had a Moz Pro subscription (the difference is that the paid Moz API is a separate subscription, starting at $250/month).

For our part, we have simplified the integration interface, which now looks like this: 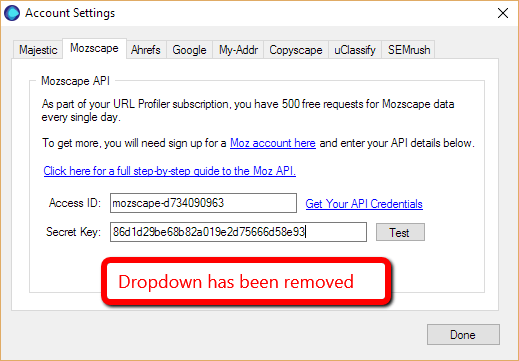 The dropdown has been removed, which previously forced you to select between Free, Pro and Paid.

Now, URL Profiler will check the account for you, and set the correct rate limit and data allowance based on the type of account you have.

There may still be some issues from Moz’s side, but they are also working to improve this.

Last year, Moz added a new metric into Open Site Explorer – Spam Score – which works out a score from 0 to 17 to help determine how spammy a subdomain might be (note that it only works at the subdomain level, not URL or root domain).

The Spam Score is available in the API, but only for Paid API users, so this is not available if you have a free API key, or are a Moz Pro subscriber.

The best way to test this out is to import a bunch of different domains, and ticking the ‘Moz’ box under ‘Domain Level Data’. Before you run the profiler, head up to Settings-> Link Metrics and choose ‘Full Link Metrics’ from the Moz dropdown.

After you run the profiler, you’ll see results like this: 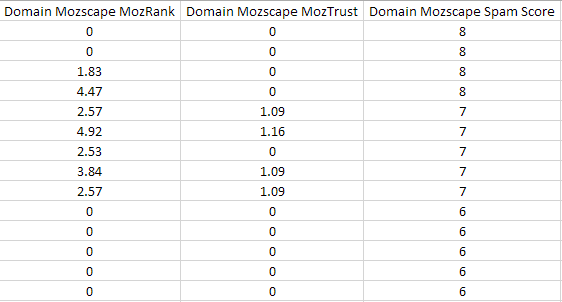 The higher the Spam Score, the worse the domain/subdomain, in theory.

Note: In Open Site Explorer, the score runs from 0 to 17. In URL Profiler, it goes from 1 to 18, where 1 is the ‘cleanest’ site you can be (e.g. bbc.co.uk). If you get a 0 in your result set, this means that either you don’t have access to the data (if you have a Moz Pro account, for instance, and not paid), or that Moz have not calculated the score for that subdomain.

As ever, there were a few small issues to resolve: